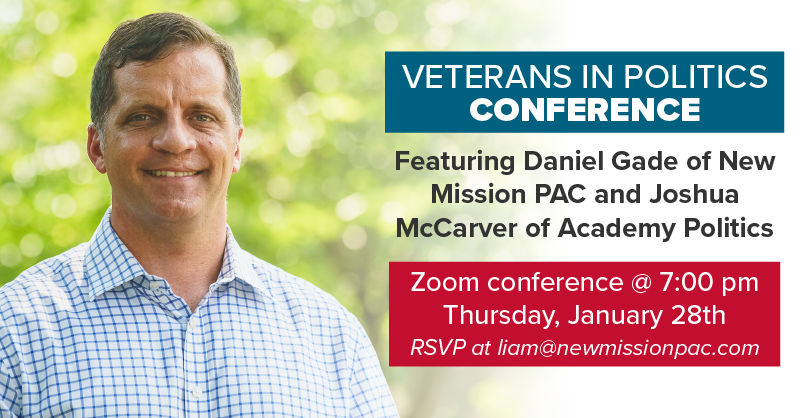 Alexandria, VA – Dr. Daniel Gade, 2020 Republican nominee for US Senate in Virginia and founder of New Mission PAC, and Josh McCarver of Academy Politics will be hosting and presenting during a Zoom conference on Thursday, January 28th at 7:00 PM in which they will discuss their respective missions and shared goals. In attendance will be numerous elected officials, political candidates, and others affiliated with the cause of electing veterans to public office. Members of the press are encouraged to attend.

What: Veterans in Politics Zoom Conference hosted by Daniel Gade of New Mission PAC and Josh McCarver of Academy Politics.

Where: On Zoom (link can be obtained by emailing Liam@NewMissionPAC.com).

Why: To further the cause of electing veteran candidates and to educate on how New Mission PAC and Academy Politics are working towards this endeavor.

Gade and McCarver will be opening the forum to discussion and questions upon the completion of their presentations. RSVPs should be sent to Liam@NewMissionPAC.com.

New Mission PAC was founded by former Virginia Republican U.S. Senate nominee and retired U.S. Army lieutenant colonel, Dr. Daniel Gade. Today, less than 20% of Congress has served in the armed forces and that number has steadily declined since the 1970s. New Mission PAC’s priority is to assist veterans running for office, inform voters on issues related to armed services and elect public officials with a new mission to serve.

Former Virginia GOP nominee for U.S. Senate Dr. Daniel Gade is a retired U.S. Army lieutenant colonel, professor, and public policy leader. During more than 25 years of military service, he was awarded the Legion of Merit, Bronze Star, and two Purple Hearts. Daniel graduated from West Point in 1997. He currently resides in Alexandria with his wife of 21 years, Wendy, and their three children.

Stay Up To Date!